You might know Jeffrey Brown from the witty children’s picture book Darth Vader and Son, or its equally clever sequel Vader’s Little Princess, but Brown got his start in comics way back in 2002 with books definitely not made for kids.

His first graphic novel was a shot out of the blue. It was self-published with a minimalist, latte-colored cover and the title scribbled crookedly across the top: Clumsy.

Clumsy was exactly what the whole book was, and it was amazing.

Clumsy was an auto-biographical story about Brown and an ex-girlfriend, Theresa. Through a series of one-page vignettes, the reader becomes witness to their topsy-turvy year-long relationship. We witness the moment when they first met, when they first made love, when they had their first argument, the very-highs and the very-lows of a relationship doomed from the start. 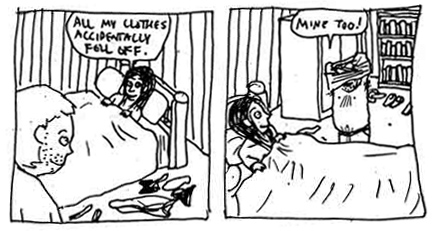 From Clumsy by Jeffrey Brown

We get all of this in Brown’s messy scrawl. There is nothing elegant or pretty about Brown. Not his art, not his writing, and certainly not his relationships. But that’s what makes his work so endearing.

Brown wields an unabashed honesty. Sex isn’t brushed up with pink hues and cinematic sheen. It’s silly and awkward, full of giggles and belt-fumbling. Brown himself is a permanently scruffy average joe with patches of body hair  and a pudgy gut. He is also insensitive yet over-sensitive, adorably quirky yet embarrassing beyond measure. He’s sincere, but he’s–wait for it–clumsy. In all his works, Brown juxtaposes humor and heartache, using the mundane to reveal the most telling aspects of himself and his relationships. His stories have no real plot, no real beginning and no real resolution. They are equal parts relatable and frustrating. They are perhaps frustrating because they are relatable.

It’s easy to see yourself in Brown’s shoes or in the shoes of the woman’s he dating. When Brown ignores Theresa’s insecurities, you realize, in horror, you did the same thing to someone once–or you remember when someone did that to you and how much it hurt.

Reading Jeffrey Brown’s work can be like watching re-runs of your own life. The bittersweet reality of it is what makes you come back for more.

Today, Brown writes less about ex-girlfriends and more about Stars Wars and the antics of his own son. (That’s right folks, things worked out for clumsy ol’ Brown after all!) His work is now a little less bitter and a little more sweet.

Even if it is just a picture book featuring Darth Vader and Luke Skywalker, though, Brown is still as apt as ever at portraying the universal truths through the silly everyday moments of our lives.