My First Time at a Swingers Club 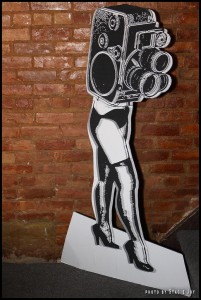 The doorway to my first swinger’s club was tucked away in a non-descript metal-sheathed building that, to the casual observer, would signal nothing more than a shop closed for the evening.  The door was unlocked and led to a narrow stairwell with a sheet on the glass door that advertised the CineKink Film Festival  awards after-party happening above.

When I reached the main floor, I couldn’t help the grin that sprang to my lips as I took in the dark wood paneling and the black leather couches that surrounded the CineKink photo backdrop. It was how I had always imagined a swingers club would look, right down to the broken vintage jukebox and colored ambient lighting.

I said hello to the directors I had met through the festival and shook hands with the father of my filmmaker friend, Creamy Coconut. While supportive of his daughter, he looked more than a little relieved to meet a young woman at this event who was in a blazer and boots as opposed to the thigh-high stockings and chained collars that many of the other attendees supported.

The first floor was a safe place for guests who were not interested in “playing” but those who were so inclined could indulge on the second or third floor, and I eventually found myself ascending the stairway with Creamy Coconut and her friends (when in Rome, right?) A retro-sexy décor extended to all of the three floors, and the sheer amount of zebra print furniture and carpets accumulated in this cozy space was certainly impressive.

The night started out G-rated, but as the guests became more comfortable with their surroundings and the other guests, clothing started to come off and sounds of salacious spanking and heavy breathing filled the rooms. Spaces were set up that could be either private or exhibitionist and as we sat chatting in the curtained area, my voyeuristic side started to show its face. Every once in a while I would peek around the drapes and catch glimpses of hands expertly tied with ropes winding around full breasts and sweat dripping down slick thighs.

I never really thought of myself as a prude, but I did not know what to do with myself when I was handed a paddle and asked by my couch partner for a spanking. The giggle fever overcame me and all I could manage was one measly thwack before I had to let an expert Dom take over. And she was good. Very good. She was a true pleasure artist, and I could tell that the writhing recipient was glad to be in her experienced hands rather than suffer through my clumsy half-hearted attempt. 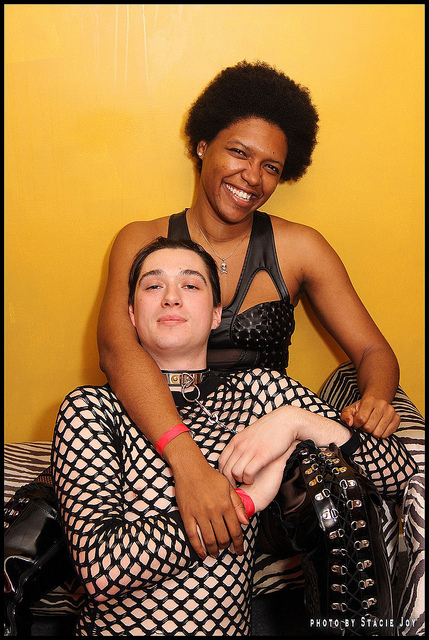 Sure there was a fair amount of tickling, a cuddle session I’ll never forget, and a dash of light caresses, but I had let my new friends know where my boundaries lay and they were the epitome of respectful… in addition to being damn sexy. (Just because nothing happened doesn’t mean I can’t fantasize about it.)

While it may not be for the faint of heart to enter a swingers club after party, I could not imagine a more inviting and considerate crowd and I have to congratulate the Cinekink Film Festival for creating an atmosphere with just the right mixture of play and prude.  I can’t wait for next year to come so that I can explore all of the fantastic filmmakers who showcase their work at this festival and I whole heartedly recommend the experience to anyone interested in seeing what life could be like if we loosened our inhibitions a bit and just played.