A Sexy Scientific Discovery: The True Size of the Clit 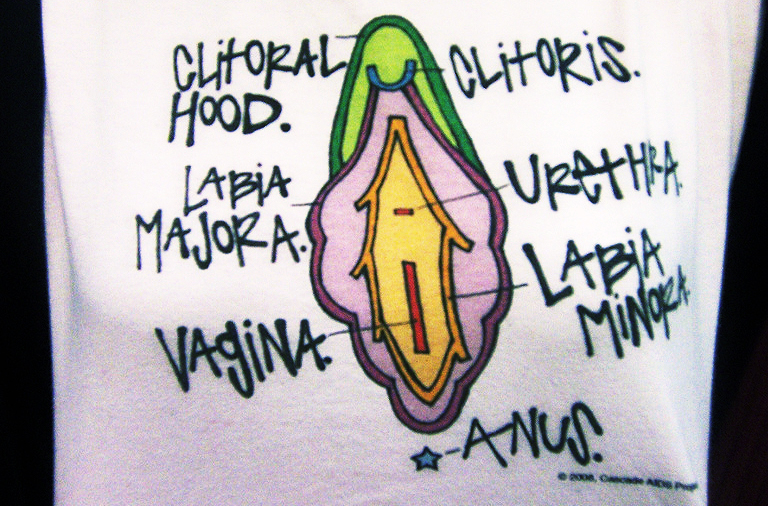 Considering myself to be a rather enlightened, well-educated woman, I was recently shocked to discover an astonishing truth about my body: namely, that every woman’s clitoris is about the same size as a man’s penis, but most of it is hidden away.

I was introduced to this rather startling detail by the artist Sophia Wallace, who explains her campaign below:

I’ve always believed in the importance of clitoral stimulation but what fascinated me about this discovery was the implications regarding the G-spot orgasm. Dr. Helen O’Connell, a prominent urologist and researcher in the field, believes that the existence of an orgasm that emanates from within by way of vaginal penetration alone, is likely due to contact with the internal clitoris.[1] While more research on the subject is necessary to draw a hard conclusion, this seems fairly logical, and regardless of the findings, the more research into female anatomy and pleasure, the better.

She also brings up a fascinating point that the study of women’s anatomy was stunted from the very beginning, though not by way of any diabolical patriarchal scheme. The study of anatomy has its strongest roots in the Renaissance, when the only cadavers available were from criminals who had been executed. As such, female cadavers were much harder to come by and the first anatomical text was based on only 3 female specimen.

Rebecca Chalker, a medical writer, sexologist, and women’s health advocate explains in her book, “The Clitoral Truth: The Secret World at Your Fingertips,” how, for nearly 2500 years the clitoris and penis were considered to be equal counterparts. However, around the 18th century, prominent medical sources began to leave out critical clitoral information, perhaps as a reaction to the rising demand from women for equal rights. [2]

And then came Sigmund Freud, the clueless creator of “penis envy,” who convinced the western world that if a woman has not developed the ability to have vaginal orgasms by the time she matured, then she must be clinically dysfunctional. Perhaps the most notable casualty of this paradigm was Napoleon Bonaparte’s niece, Marie Bonaparte, who was an avid disciple of Freud. She determined the ideal distance between the clitoris and the vaginal opening to be somewhere around 2 inches, then underwent voluntary genital mutilation to move her clitoris, which was, not surprisingly, ineffective.

We have certainly come a long way from the teachings of Sigmund Freud, but this critical clitoral information is still not disseminated. Every text book I can remember only highlighted the reproductive parts of female sexual anatomy, but then again…I can’t even count the number of times a college professor has told me that what I learned in high-school was wrong.

If only we all had Betty Dodson as our health teacher…