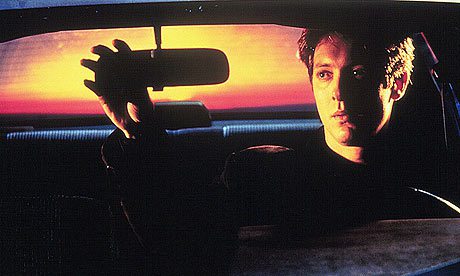 Crash isn’t David Cronenberg’s first psycho-sexual cringe masterpiece, but it’s up there with his best. Cronenberg’s stories often center around the collision of the physical with the virtual; for example,  in Videodrome (1983) a mysterious and sexually arousing TV program causes grotesque physical effects (I’m not talking about hard-ons) on its viewers.

Like Videodrome, Crash tows the line between sexy and downright strange. In its opening scene, a woman writhes in anticipatory ecstacy against the nose of a small plane as off screen footsteps get louder and a shirtless hunk appears, savagely pulling her skirt up and panties down. She turns out to be married to protagonist James Ballard.

The term “marriage” should be used loosely here because the two seem to be more interested in rehashing their extra-marital misdeeds together than actually getting physical.  Things take a turn for the weirder when Ballard, a film director played by James Spader, gets into a car accident that lands him in the hospital. While wandering its fluorescent corridors, he crosses paths with the woman who he crashed into. They meet again at the junkyard that holds their totaled cars, and soon find their bodies mangled together, but this time in the passionate embrace of sex.

She takes him to a secret reenactment of James Dean’s fatal car crash and introduces him to the event’s organizer, a crash fetishist named Vaughn. No joke, this guy’s idea of foreplay is playing chicken with a NASCAR driver. Ballard is fascinated by Vaughn’s dedication to this dark pursuit, and soon he too is on the prowl for gratification through twisted metal.

From that point on, every scene involving a vehicle is a heart-pumping affair. The two cruise around in Vaughn’s car, relishing the possibility of a head-on collision. As time goes by, Ballard and Vaughn look at each other in a way that indicates more than just a mutual search for kicks. Could…they be…? No…wait! Are they?

Will James sacrifice everything to the rock-hard messiah of getting off? Only time (an hour-thirty) will tell, but Cronenberg’s mastery of film is such that it’s not only James who is teetering on the edge. If you’re not careful, this sexual revvvolution could send you speeding into risky business, so stay on the safe side – wait a minute after the film ends before you get behind the wheel.