Peer Inside the Purple Milk Mind- A Film Production Interview 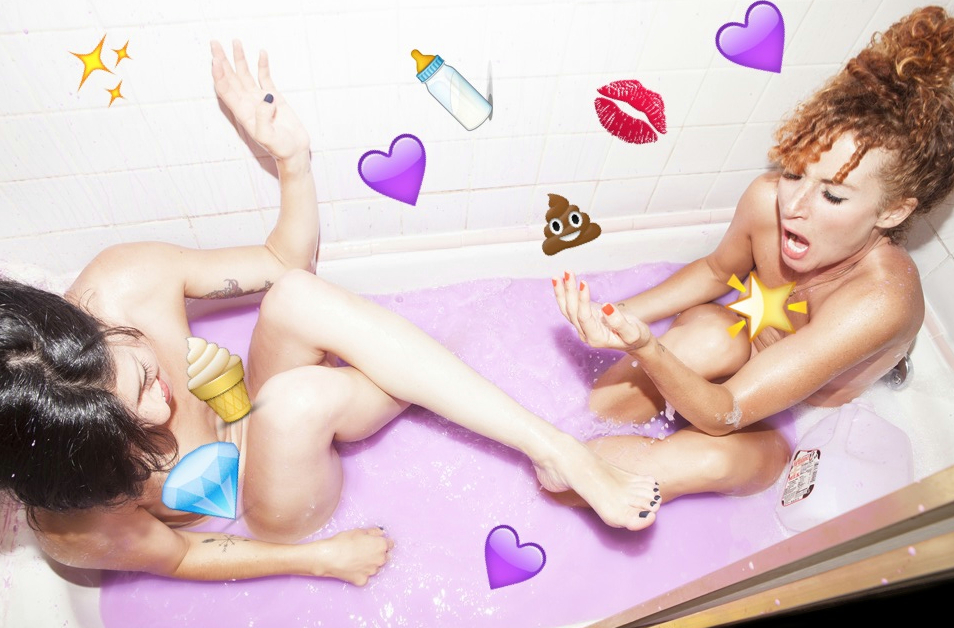 Purple Milk, made up of Natalia Leite and Alexandra Roxo, is the production company behind an impressive body of work that has been featured on Vice, Vogue, and the Wall St. Journal. Their work, which artfully considers topics not many are willing to explore, spans from music videos, to web series (Every Woman, Be Here Nowish), documentaries (Serrano Shoots Cuba), commercial work and feature films (Bare). The duo met at a party in Brooklyn, and after exchanging relationship advice, realized that they had they just might have right dynamic to make great films together.

When you first met, what did you see in each other that made you realize that teaming up could be a really great thing?

A: Well, at the time we didn’t really know how long we would be working together or what the extent of our partnership would be, but we just had a lot in common. We were drawn to a lot of similar topics and we both have a very strong work ethic. Also, Natalia is Brazilian and I’m half Brazilian. We both speak Portuguese and we both are into exploring our spirituality. We connected first as friends.

Do you see your Brazilian descent influencing you work?

N: I’ve been living in the US for a while and so it’s more of a miss match of different experiences that we’ve had, and the influence from our parents. Our background is not just from Brazil so I wouldn’t say there was anything directly Brazilian other than maybe our openness. Brazilians tend to have a very positive attitude and to be more open with our sexuality.

You both seem to have projects that you work on individually in addition to Purple Milk. How do you decide what will be collaborative and what will be individual?

N: At this point it is all Purple Milk productions. Even if we are not co-directing something, we do keep it all under our company umbrella. For example this summer I directed a feature and Alexandra produced it. We decided after a while of working together that we just wanted to produce everything that way.

Your works spans from narratives, to music videos to documentaries and commercial work. Do you have a particular medium you prefer and how do you decide what sort of projects you will work on?

N: There is not really a particular medium we work with. It definitely depends on the project. All of our projects start out as a concept, and then we just figure out what would be the best form for that concept. We love being story tellers, but it varies; there is not a preferred style.

A: We have to turn some stuff down because we want to do work that is very true to us. We’re not just jumping at anything that comes our way but luckily we’ve managed to make a living with the ideas that come from our brains, and it’s been going pretty well for us.

In many of your films you are both in front of the camera and behind. Do you see these roles as necessarily intertwined for you projects?

N: We like to put ourselves in front of the camera now, but it just started off because no one else was going to show up every day. We didn’t have any money and no one wanted to do it for free. No one else is going to care about it like we do.

When you put yourself in front of the camera, how much do the characters reflect who you are?

A: Well I think that it depends per project, but for Be Here Nowish we would take traits that we do have and just play them up. Then sometimes we play with things that we would never do. Like Natalia would never be a drug dealer but we knew those people who are really smart, great artists who do sell drugs. In these choices we are saying that hey, these people aren’t as crazy as you thought. So in the end, it’s a combination of some elements of our personality, some elements of the people around us and then the exaggeration of some of these elements.

Your work often touches on themes of sexuality and spirituality. Can  you explain why these are important subjects for you to interact with as filmmakers, and what you hope the result of this interaction will be?

N: We’ve always thought those things are important, and part of the reason is that in the media, on television and in film, there are very few LGBTQ characters, and there aren’t as many strong female characters as men. There is also a very small percentage of female directors.

The shift in sexuality, the way people are exploring, breaking traditions and forging their own paths is important for us, and I think we’ve always been interested in that in our own ways. We’ve just been curious about these things, and so it’s naturally going to be in our work because it is how we relate to the word.

Both of your most recent works, Bare and Every Woman, center around truck stop strippers. Can you explain where your inspiration came from and how the two projects influenced each other?

N: Bare was the first concept that took form and when we were scouting a location for it, we came across this truck stop and strip club in New Mexico and we thought it would be a great location. The truckers who stopped by and people who lived there were very unique, and it was a very transient place. So from that we thought of this other idea that turned into Every Woman, because we were thinking about what it would be like if we lived in these women’s shoes for a period of time. We ended up shooting that before the feature, while we were writing the other film.

Can you tell us a bit about the feature you are working on right now?

N; We’re working in post production on Bare right now which stars Paz De La Huerta and Diana Agron. It’s the story of a young girl living in Nevada who gets romantically involved with an older woman who convinces her to get a job at a truck stop strip club. Her life spirals out and starts to change from there as she’s brought into this other world with drugs and spiritual experiences. So it’s about her learning from that.

What do you want from Purple Milk in the long run, where do you see yourself in 10 years?

A: We just want to keep making films, expanding our work and challenging ourselves. It’s very gratifying to expand our understanding of some of these themes, but also just to really have fun with it. You know, we want to be happy.