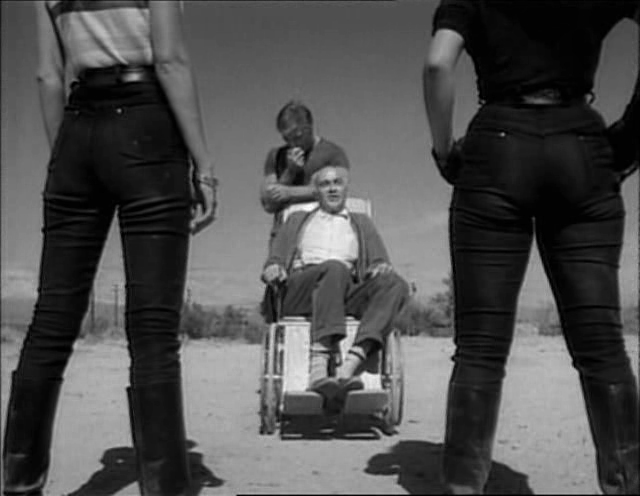 If you want to know where Hollywood got its rep as a sleazeball kingdom, look no further than Faster, Pussycat! Kill! Kill! Director Russ Meyer, the self-proclaimed King of the Nudies, brings us back to the greasiest chapter of Hollywood history, where curves, bulges, muscle bound hunks and bound and gagged girls in sports cars bounced down desert highways in bold black and white. A voice announces “Ladies and gentlemen, welcome to violence” while jerky jazz threatens to break past the background – and we’re off. This is a burlesque show with a body count, so on the off-chance you’ve got an extra hand, hold onto your chair.

Three Go Go dancers speed into the desert after work. They play a game of chicken and then set up shop, cracking open beers and cranking up the car stereo. Before long, another set of wheels comes into frame, and out pop a couple squares who want to run time-trials on their car. The girls promptly challenge them to a race, and the ominous chamber music sets in. The race escalates into a sandy kung-fu takedown, and the girls stowe the captured couple in a trunk. They flee the scene to a gas station where they hear talk of a wheelchair-bound man quite literally sitting on a large sum of cash from a railroad accident settlement. They scope out the place, but the old man catches on and has his brain-dead hunk of a son, nicknamed The Vegetable, wheel him over to where their convoy is parked. He invites them to lunch, and of course they accept.

Turns out his motives are just as bad as theirs. Does he want to sacrifice them to the railroad gods that cost him his legs or use them as sex slaves? It’s unclear. All we know is that this guy is not scared to kick some serious ass on the way to getting a leg up. And yes, maybe in Russ Meyer’s Hollywood, western expansion means an upgrade to double D’s, but he sure as hell doesn’t think skin is a substitute for plot. You’re literally watching a battle of the sexes, and both sides use seduction as a weapon. Although there is no on-screen penetration, the director uses locations to create a risque vibe. There’s a rendezvous on train tracks, a hook-up in a haystack, but in this world, just because you shared a passionate moment doesn’t mean you won’t get a knife in a back later.

It doesn’t matter if it’s cowboys and indians or Go-Go dancers and shotgun wielding shut ins, the desert has the aesthetic of impending massacre. What else is there to do but kill each other? Even the clouds seem to have their own shadowy agenda, crowding above the action and waiting for their chance to butt-in. It’s easy to notice these aesthetic details because we’re not being suffocated by some dusty moral. This movie aims to affect the audience through how things look, and it succeeds.

Regardless, many academics say that Meyer’s movies have a deeper message. He’s been called a feminist filmmaker because of the power dynamics he created between men and women. Meyer denied any moralization of his movies, saying it was all about “lust and profit.” Whether or not you can squeeze something redeeming out of Faster, Pussycat! Kill! Kill!, one thing’s for sure:  indulging in this movie will give you plenty to feel guilty about.